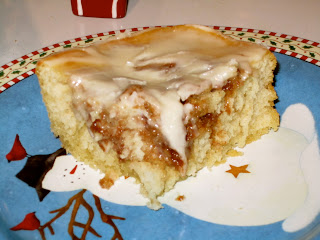 Preheat oven to 350 degrees Fahrenheit.  Mix the gluten free flour mix, xanthum gum, salt, sugar, baking powder, milk, eggs and vanilla. Once combined well, slowly stir in melted butter. Pour batter into a greased 9 x 19 square inch baking pan. (You can double the recipe for a 9x13 pan).
To make the streusel, mix the softened butter, brown sugar, gluten free flour mix, and cinnamon until well combined. Drop evenly over cake batter by the tablespoonfuls and use a knife to marble/swirl through the cake.
Bake at 350 for 25-30 minutes or until toothpick comes out nearly clean from center. Make the glaze (or use cream cheese frosting  like I did for a truly decadent experience!).  For glaze, place powdered sugar, milk and vanilla in a large bowl. Whisk until smooth. Drizzle over warm cake. Delicious served warm, but even better for breakfast the next day!

Thanks for sharing the Cinnabun Cake recipe picky palate! 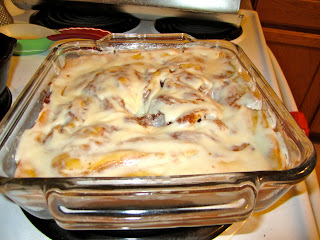 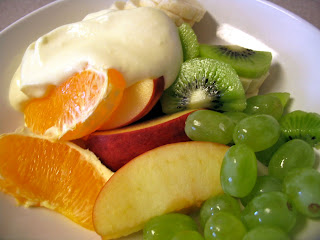 Christmas in Arizona:  Where fresh fruit sounds better than a steaming cup of cocoa!  I'm still not sure about this warm Christmas thing, but since there's always some kind of fruit in season, here's a delicious dip from my friend Camille that's good no matter the temperature outside!  I usually make this with sugar free pudding and fat free or lite whipped topping.  Always check that your ingredients are gluten free!

Combined pudding and milk and whisk 2 minutes.  Stir in whipped topping and refrigerate until set (20-30 minutes).  Serve with your favorite fruits. 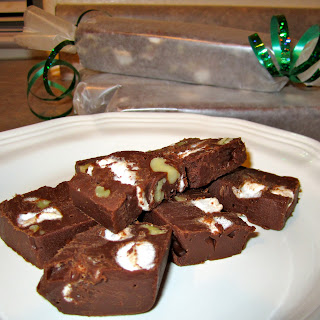 I found this recipe 7 years ago and have been using it exclusively ever since.  I've adjusted it to my taste and added marshmallows to make it rocky road.  This is a Christmas favorite! 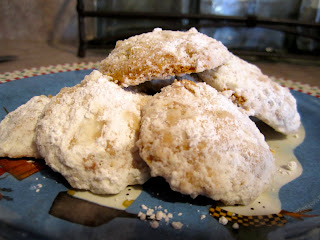 While these tasted good, they definitely aren't the cute little snowball cookies they were suppose to be.  Maybe I needed to use a little more flour.  I'll have to play around a bit with the recipe, but for the time being, this is what you get!
"Not Yet Perfect" Gluten Free Russian Tea Cakes

Preheat oven to 350  degrees Fahrenheit.  In a mixing bowl, cream the butter and vanilla until smooth.  Sift the 3 Tablespoons powdered sugar and gluten free flour into the butter mixture and stir until just combined.  Mix in the walnuts.  Roll dough into 1 inch balls and bake on an un-greased cookie sheet for 15 minutes.  Allow to cool slightly before rolling in powdered sugar to give them their snowy appearance. 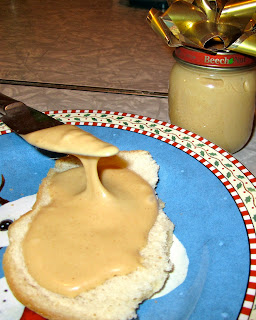 I fell in love with Amish Peanut Butter in an Amish restaurant in Shipshiwana, Indiana.  Lucky for me it's a cinch to make and a great gift to share with others!  This is great on bread, poured over ice cream, or used as a fruit dip.

Mix everything together until well combined.  Store in an air tight container. 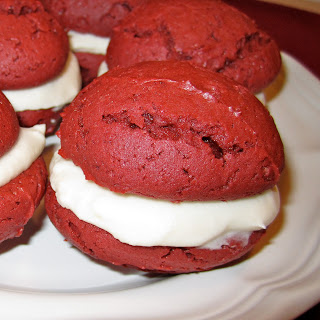 I am totally in love with anything red velvet so when I saw this recipe on better homes and garden's website I knew I had to try it gluten free.  These are fantastically delicious!  I swapped out the flour for gluten free and added xanthum gum.  I also used cream cheese frosting instead of the filling they suggested.  With their bright red color these are perfect for bringing a little Christmas cheer to anyone who's lucky enough to get one!

Preheat oven to 375 degrees F and line baking sheets with parchment. In a large mixing bowl beat butter on medium to high 30 seconds. Beat in brown sugar until light and fluffy. Beat in egg and vanilla.  Sift together gluten free flour mix, cocoa powder, xanthum gum, baking soda, and salt. Add dry ingredients to the butter mixture and mix on low while slowly adding the buttermilk. Stir in food coloring and mix on medium for 1 minute until well combined.

Drop cookie dough by tablespoons (a cookie scoop works best to keep them all the same size) onto the parchment paper and bake for 11 minutes or until tops are set.  Allow cookie to cool. Frost bottom side of cookie with cream cheese frosting and sandwich with the bottom of another cookie.  Store whoopie pies in the refrigerator.

**I had some leftover chocolate frosting from my husbands birthday so I used it in place of the cream cheese for some of the whoopie pies.  They were delicious and I'm really not sure which I like better! 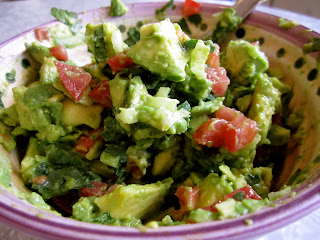 Every now and again it's nice to have a savory treat grace the table.  This guacamole with chunks of avocado and tomato looks just like Christmas!  Guacamole is a great appetizer to share at a holiday party but simple enough to throw together for a fun snack to munch during a college bowl game.

Place avocados in a bowl and mash with a fork. Stir in the other ingredients.  Only add part of the salt at a time and taste before adding more.  Serve with tortilla chips. 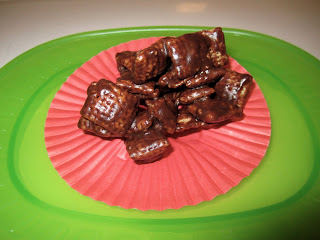 I was planning on making butterscotch haystacks swapping out the chow mein noodles for rice chex. As I was opening the butterscotch chips I glanced at the ingredients and did a double take as I saw "barley protein" listed.  I jumped online and sure enough, butterscotch morsels are NOT listed on Nestle's gluten free product list.  Not to be deterred, I swapped out the butterscotch chips with semi-sweet and came out with yummy results.  Lesson learned - Aways double check your ingredients!!! 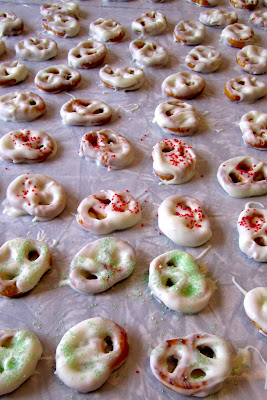 Okay, technically these are made from white morsels and not white chocolate, but since I'm not really a connoisseur of white chocolate, these taste good enough for me!  I followed the directions for melting the morsels found on the back of the package (I used Nestle, but any kind will do as long as they're gluten free).  3 for the neighbors, one for me...yum!

Place chips and oil in a microwave proof bowl and microwave on high for 1 minute.  Stir mixture and if chips aren't melted microwave for 15 more seconds, stir, heat 15 more seconds, stir etc...until the mixture is smooth.  Place a sheet of wax paper on your work surface.  place a few pretzels in the bowl with your melted chocolate, coat both sides (I used a toothpick to help turn the pretzels around), let the excess chocolate drip off and then place the pretzels on the wax paper to set.  If you want to use sprinkles, add them before the chocolate sets so they will stick.   If your chocolate mixture starts to set up in the bowl before you're finished, place it back in the microwave for 15 seconds to re-melt it. 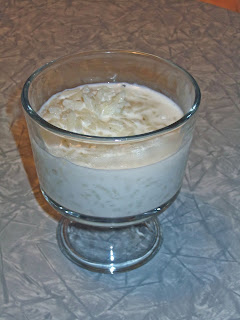 Simple and delicious.  This is comfort food at it's best!  While serving a mission for The Church of Jesus Christ of Latter-Day Saints, my friend Concha taught me how this is made in her native country of Mexico.  Arroz con Leche is a thinner version of rice pudding.  While it does thicken, it will still have some milk that isn't completely incorporated into the mixture.  This is a great way to use up any leftover rice in your refrigerator or you can make up a new batch using 1 cup of uncooked rice.  Cook according to the package directions before continuing with the recipe below.

Place all ingredients into a 3 quart saucepan and bring to a simmer over medium heat.  Reduce the heat to medium low and simmer for 20 minutes.  Remove the cinnamon stick.  The mixture will be the consistency of cream and will thicken as it cools.  This is best served warm. 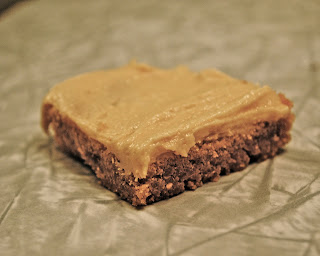 This is a childhood favorite that tastes just as good gluten free!

Preheat oven to 350 degrees Fahrenheit.  Cream everything together except the flour.  Add the flour and stir until just combined.  Press dough into a 1/2 sheet pan (the really BIG cookie sheet) and bake for 12 - 15 minutes.  The brownies will be a very pale brown and might even look like they need more time, but DO NOT OVER BAKE!  They will go from a soft brownie to a crispy one in a minute or 2.  They'll still taste good, but the texture will not be brownie-like.  Allow to cool before frosting.

Place ingredients into a mixing bowl and beat until smooth.  Frost cooled brownies.  This makes a thin layer and I usually double it because I'm a frosting girl! 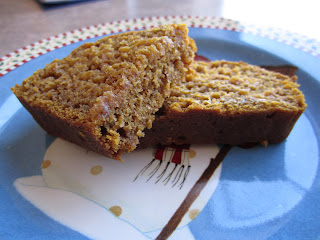 Sorry neighbors, this bread was so moist and delicious that I nibbled away the whole loaf and left none for you.  Next time I might cut the sugar to 3/4 cup, as it was a bit on the sweet side.  I'll be making this one again for sure!

Preheat oven to 350 degrees Fahrenheit.  Combine sugar, eggs, water, oil and pumpkin in a mixing bowl and blend well.  Sift remaining ingredients into the mixing bowl and stir until well blended.  Do not over beat.  Pour batter into a 4 x 8 inch loaf pan that has been sprayed with cooking spray.  Bake for 50 - 60 minutes or until toothpick inserted into the center comes out clean.  Cool 10 minutes before removing from the pan.  It's best if you can wait until the next day to eat it so the flavors have time to mingle.  Yum!

I'm stepping out of my comfort zone a little bit with this one.  We moved from Illinois to Arizona 3 months ago and not a single one of our neighbors has come over to introduce themselves.  I know, I know, who's to say that it's their responsibility to make the first move.  But seriously, we're the new guys!  Okay.   I'm over it.  We want to meet our neighbors and since they're never outside when we are, I guess we're going to have to knock on a few doors.

Christmas (or any holiday) is a great excuse/opportunity to make up a plate of treats and stop by to say hello to a new friend.  For the next 12 days I'm going to try out some new gluten free recipes to share with our neighbors.  Good or bad, I'll post the recipes and results.  Wish me luck!