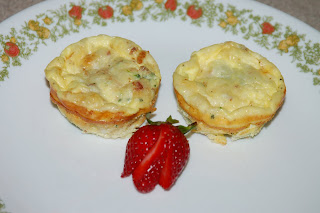 My mom found this great crustless quiche recipe that was practically gluten free - love that!  All we had to do was swap out the all-purpose flour for rice flour.
Crustless Quiche
1 tablespoon vegetable oil
1 onion, chopped
1 clove garlic
1 (10 ounce) package frozen chopped spinach, thawed and drained OR 1 cup broccoli florets, steamed
3 slices bacon cooked and cumbled
5 eggs, beaten
1 cup whole milk
1/4 cup half & half
1 1/2 cups shredded Gruyere cheese combined with 1 Tablespoon rice flour
1/2 teaspoon salt
1/8 teaspoon nutmeg
freshly ground black pepper, to taste
Preheat oven to 400 degrees. Lightly grease a 9 inch pie pan or 12 count muffin pan.
Heat oil in a large skillet over medium-high heat. Add onions and cook, stirring occasionally, until onions are soft. Add garlic and saute an additional minute. Stir in spinach/broccoli and crumbled bacon. Remove from heat.
In a large bowl, combine eggs, milk, half & half, cheese, salt, nutmeg and pepper. Add spinach/broccoli mixture and stir to blend. Scoop into prepared pie or muffin pan.
Bake in preheated oven until eggs have set, about 45 minutes for pie pan or 20 minutes for muffin pan. Let cool for 10 minutes before serving.
We used a muffin pan and made mini quiches. They were so cute and would be great to serve for brunch.  We will be making these again soon! 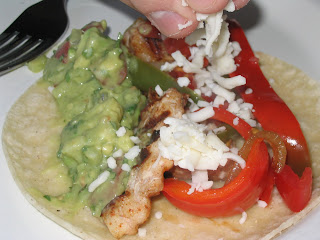 We love Mexican food and don't really need an excuse to eat it, in fact if it weren't for quesadillas with refried beans and salsa I don't know how we'd survive the lunch hour. Seriously, that's what we've had for lunch almost everyday since I was diagnosed with Celiac Disease (2005) and we still love it! To celebrate Cinco de Mayo we grilled some chicken, peppers, and onions and made fajitas with homemade guacamole. !Que Delicioso!

Remove skin and seed from avocado, place in a bowl and mash with a fork. add tomato, onion, serrano, cilantro and lime juice. Add 1/4 -1/2 teaspoon of salt and stir. Taste and add more salt if needed. We like a chunky guac with lots of cilantro and a little heat. Play around with the ingredients and amounts until you find the combination that you like. Serve with tortilla chips or as a condiment with your favorite Mexican dish. 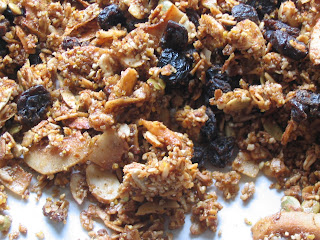 After comparing a bunch of granola recipes I came up with the following and I absolutely love it! I have to limit myself to a half cup a day - it's so good that I made myself sick eating too much the first time I tried it. I had a sample serving of Bob's Redmill Mighty Tasty GF Hot Cereal so I added it to see how it'd be. While the flavor's delicious the texture is very much like bird seed...next time I'll substitute an additional cup of oats instead. The nuts and seeds can all be swapped out for any kind you like or have on hand.

Combine first 8 ingredients in a large bowl and set aside. Place honey, oil, brown sugar, cinnamon and salt in a sauce pan and bring to a boil stirring occasionally. Remove from heat and add vanilla. Mix syrup with oat mixture and stir until everything is coated. Spread onto a large cookie sheet and cook at 300 degrees for about 1 hour or until granola turns a light golden brown. Stir every 15 minutes. Remove from oven and add raisins. Spread granola onto parchment paper to cool. Store in airtight container in the refrigerator.
*UPDATE* I have since made this using all oatmeal (instead of part Mighty tasty GF Cereal) and added a 1/2 teaspoon of maple flavoring along with the vanilla.  Delicious!