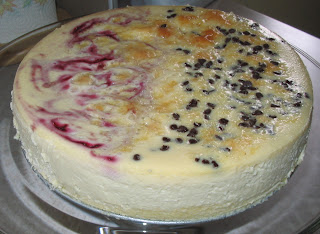 The April Challenge is hosted by Jenny from Jenny Bakes.  She has chosen Abby's Infamous Cheesecake as the challenge.  I  love, love, LOVE cheesecake!  I think it is probably the best thing ever invented ...ever!  I was excited to make cheesecake for the DB Challenge this month and even more excited to eat it!  I had a hard time deciding what flavor to make.  I prefer fruit and my husband prefers chocolate but I only have one springform pan so I decided to experiment and do half of the cheesecake raspberry swirl and the other half chocolate chip.  It actually worked out really well and I will do it that way again so that we can have more than one kind of cheesecake.  Plus it was super sinple to do.  I poured the batter over my gluten free sponge cake crust and then I swirled raspberry puree through one half and mini chocolate chips through the other half. 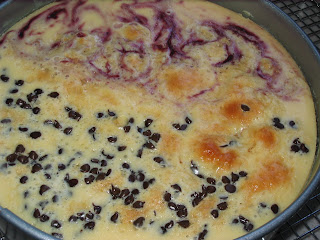 The cheesecake was creamy and absolutely delicious.  I was worried about baking it too long but at 45 minutes it hadn't set.  At 55 minutes it still had a lot of jiggle but because I was so worried about over-baking it I turned the oven off.  It ended up being under-baked and had the appearance of room temperature Brie when I cut into it, but that didn't take away any of the pleasure this creation delivered to our senses.  Next time I will bake it and additional 5 minutes.
I followed the cheesecake recipe except for the crust because it wasn't gluten free.  For my crust I made a gluten free sponge cake - an idea I got from Junior's Cheesecake's in New York (theirs isn't gluten free).
Here are the recipes:
Gluten Free Sponge Cake Crust
1/3 cup gluten free flour blend
3/4 teaspoon baking powder
1/4 teaspoon xanthum gum
Pinch of salt
3 large eggs, separated
1/3 cup sugar
1 teaspoon pure vanilla extract
2 drops pure lemon extract
2 tablespoons unsalted butter, melted
1/4 teaspoon cream of tartar

1. Preheat the oven to 350°F and generously butter the bottom and sides of a 9-inch springform pan (preferably a nonstick one). Wrap the outside with aluminum foil, covering the bottom and extending all the way up the sides.
2. In a small bowl, sift the flour, baking powder, and salt together.
3. Beat the egg yolks in a large bowl with an electric mixer on high for 3 minutes. With the mixer running, slowly add 2 tablespoons of the sugar and beat until thick light yellow ribbons form, about 5 minutes more. Beat in the extracts.
4. Sift the flour mixture over the batter and stir it in by hand, just until no more white flecks appear. Now, blend in the melted butter.
5. Using a clean bowl and clean beaters. Put the egg whites and cream of tartar into the bowl and beat with the mixer on high until frothy. Gradually add the remaining sugar and continue beating until stiff peaks form (the whites will stand up and look glossy, not dry). Fold about one-third of the whites into the batter, then the remaining whites. Don’t worry if you still see a few white specks, as they’ll disappear during baking.
6. Gently spread out the batter over the bottom of the pan, and bake just until set but not sticky, 13-15 minutes. Touch the cake gently in the center. If it springs back, it’s done. Watch carefully and don’t let the top brown. Leave the crust in the pan and place on a wire rack to cool.
Abby's Infamous Cheesecake:
3 sticks of cream cheese, 8 oz each (total of 24 oz) room temperature
1 cup / 210 g sugar
3 large eggs
1 cup / 8 oz heavy cream
1 tbsp. lemon juice
1 tbsp. vanilla extract (or the innards of a vanilla bean)

2. Combine cream cheese and sugar in the bowl of a stand-mixer (or in a large bowl if using a hand-mixer) and cream together until smooth. Add eggs, one at a time, fully incorporating each before adding the next. Make sure to scrape down the bowl in between each egg. Add heavy cream, vanilla, lemon juice, and alcohol and blend until smooth and creamy.

3. Pour batter into prepared crust and tap the pan on the counter a few times to bring all air bubbles to the surface. Place pan into a larger pan and pour boiling water into the larger pan until halfway up the side of the cheesecake pan. If cheesecake pan is not airtight, cover bottom securely with foil before adding water.

4. Bake 45 to 55 minutes, (I'm doing mine 60 minutes next time) until it is almost done - this can be hard to judge, but you're looking for the cake to hold together, but still have a lot of jiggle to it in the center. You don't want it to be completely firm at this stage. Close the oven door, turn the heat off, and let rest in the cooling oven for one hour. This lets the cake finish cooking and cool down gently enough so that it won't crack on the top. After one hour, remove cheesecake from oven and lift carefully out of water bath. Let it finish cooling on the counter, and then cover and put in the fridge to chill. Once fully chilled, it is ready to serve.

Pan note: The creator of this recipe used to use a springform pan, but no matter how well she wrapped the thing in tin foil, water would always seep in and make the crust soggy. Now she uses one of those 1-use foil "casserole" shaped pans from the grocery store. They're 8 or 9 inches wide and really deep, and best of all, water-tight. When it comes time to serve, just cut the foil away. (I used a 9" springform pan wrapped in foil and it worked well for me.) 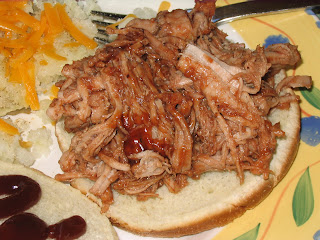 I've been craving BBQ, but the weather isn't quite ready to cooperate so I turned to my trusty crock pot for this easy and delicious BBQ pulled pork. Make sure your BBQ sauce is gluten free. My favorite is Trader Joe's All Natural Barbeque Sauce.
Crock Pot Pulled Pork
2 pounds pork tenderloin
12 ounces gluten free root-beer (I've also used cola and it's just as good)
1-2 cups gluten free BBQ sauce
Place pork tenderloin and root-beer in crock pot and cook on low for 8-10 hours. Remove pork from crock pot, use a couple of forks to shred the meat then add the BBQ sauce to your desired sauciness. Serve over gluten free hamburger buns if desired.
We enjoyed our pulled pork with baked potatoes and this yummy 7 layer salad. The recipe for the salad can be found by following this link. 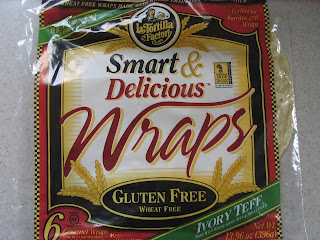 I am loving the gluten free wraps from La Tortilla Factory!  I saw these gluten free wraps at Meijer and being a lover of burritos, I decided to try them out.  The $4.99 price tag for six, 9 inch wraps nearly scared me off, but even with the price I would still be able to make a burrito for a few dollar less than my favorite burrito bol from Chipotle.  The wraps are made with millet and teff flour.  I tried the ones made with ivory teff, but they also make them with dark teff.  I'll have to try and find them so that I can do a comparison.  These wraps are very similar to flour tortillas.  I warmed them on the stove for about a minute on each side.  I used the wraps to make burritos filled with refried beans, cheddar cheese, sour cream, salsa, and some chipotle roast that was leftover from Easter (Thanks Camille!).  YUM!  These were so yummy that my husband (who doesn't have to eat gluten free) requested them 2 nights in a row.  Thanks for a producing a great product, La Tortilla Factory! 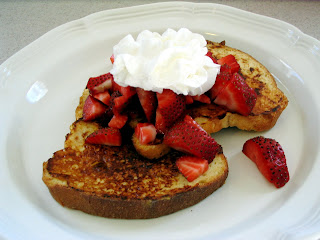 Happy Easter!  French Toast used to be one of my favorite breakfast, but I got out of the habit of making it when I had to go on a gluten free diet.  (I like corn tortillas more than most gluten free bread, so I don't have bread very often.)  When I woke up this morning I remembered that I had bread in the freezer made from the Whole Foods brand 365 gluten free bread mix (it's practically identical to the Gluten Free Pantry favorite sandwich bread mix, tastes the same but cost a little less.  Both of these are favorites when I'm making bread from a mix.)  The Easter Bunny left a carton of eggs in the refrigerator that we hadn't colored yet so we decided French Toast would be the perfect beginning to a beautiful Easter Sunday.  French Toast is so easy to make.  Here's how:
Easy Gluten Free French Toast
(makes 6 pieces)
1 egg
1/3 - 1/2 cup milk (depending on how egg-y you like it.)
1/8-1/4 teaspoon cinnamon
dash of nutmeg (optional)
1/4 teaspoon vanilla
Heat skillet to medium.  Combine ingredients in shallow dish that fits a slice of bread - I usually use a dinner plate that has steep edges.  Spray skillet with cooking spray, dip both sides of each bread slice in egg mixture and place on hot skillet.  Continue this process until skillet is covered.  Turn bread over when its light brown (about 2 minutes) and cook the other side until it is brown.  Continue process until all of the egg mixture is gone (about 6 slices). Serve immediately with syrup or your favorite toppings. 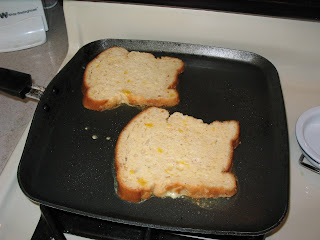 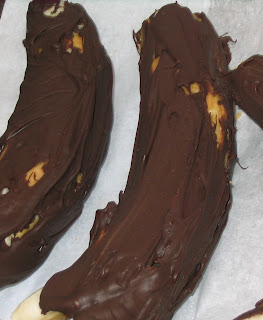 I've found my new favorite snack!  Not only does it combine 3 of my favorite ingredients, but it is so easy to make!  The peanut butter is optional and of course you can dress these bananas up by dipping them into all sorts of toppings (nuts, chocolate chips, coconut, sprinkles, etc...) after covering them in chocolate. Enjoy!
Frozen Chocolate Bananas
4 bananas at your preferred peak of ripeness (I'm picky about my bananas!)
4 teaspoons peanut butter (optional)
1 cup semi sweet chocolate chips
assorted toppings if desired
4 popsicle or craft sticks
Cover a plate or cookie sheet with waxed paper.  Peel bananas and cut about an inch off of one end.  Stick about an inch of a popsicle stick into the cut end.  If using peanut butter spread it onto the bananas now.  Place bananas onto the waxed paper and put into the freezer for about one hour.  After an hour, melt the chocolate chips in the microwave for 1-2 minutes or until just melted.  Stir to get out the lumps.  If your chocolate seems to thick you can mix in 1 Tablespoon of melted butter.  You do not want to overheat the chocolate or it will burn.  Spread the chocolate onto the frozen bananas and dip into toppings.  You'll need to work fast because the frozen bananas make the chocolate harden quickly.  Store Chocolate Bananas in an airtight container in your freezer.