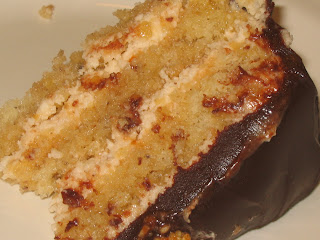 Wow!  This challenge almost got the best of me!  It comes from a recipe found in Great Cakes by Carol Walter.  I was excited to bake a cake made with hazelnuts and chocolate, one of my favorite combinations, but felt pretty overwhelmed by all the steps.  My husband stepped in as sous chef just to help me make sure I didn't forget something! And did I mention the dishes? Even with the use of my Kitchen Aid stand mixer and my electric beaters and my food processor, I still needed them all at least twice so I was washing dishes as fast as I was using them.  But the real test, that first bite resulting from my laborious project, was it really worth it? Will I make this again? I really want to say yes, but in all honesty the jury's still out on this one. The ganache, which I love, was just a little too much for this cake.  The hazelnut flavor was weak and the flavor from the peach glaze was nonexistent.  Don't get me wrong, the cake was delicious, but I can get similar results with a lot less work.  I'm hoping that a night in the fridge will help enhance the flavors so I'll be able to post an update about how amazing this tastes 24 hours later.  We'll see.
Even though this didn't turn out the way I hoped, I learned so much throughout the process and I'm happy that I took the challenge.  Some things I did for the first time during this challenge were clarifying butter, roasting hazelnuts and removing their skin, and making Swiss Buttercream.  Now I won't be so intimidated the next time I come across these things in a recipe (although I'm still a bit scared of the Swiss Buttercream!)
I followed the recipe as direct substituting a gluten free flour blend for the flour and adding a 1/4 teaspoon xanthum gum to the cake batter.  I also did not use any alcohol flavorings and I used a peach glaze as opposed to the apricot used in the original recipe.  You can find the entire recipe here.

Yep, I went through most of the dishes and bowls in my kitchen, too. DH jokes that I stop baking when I run out of utensils.
Looks lovely!

I agree, there were a lot of dishes. I also agree that I can get similar results with a lot less steps. Your cake looks really good though. Great job.