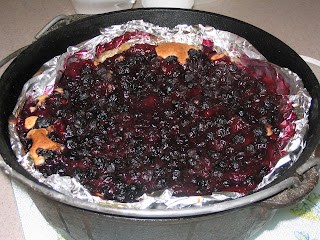 We went blueberry picking a couple of weeks ago at Tammen Farms just south of Joliet, IL.  When compared with the price of blueberries in the store, you can't beat putting forth the effort to pick your own and paying only $1.75 per pound.  We picked 17 pounds in about 3 hours and have been enjoying the fruits of our labors ever since.

When I  was diagnosed with Celiac Disease in 2005 I pretty much gave up the idea of eating dutch oven cooking.  For one thing, our dutch oven was contaminated with gluten and since we don't use it very much I didn't think it warranted buying one that we could designate "gluten free".  Secondly, dutch oven cooking is laden with glutinous shortcuts (cake mixes, cream soups, refrigerator biscuits, etc...)  It wasn't worth the effort - until we picked the blueberries.
I knew that many of these blueberries were meant to be baked into a good old fashioned cobbler and I wasn't about to deny them (or me) their mouthwatering and delicious destiny! We came across a cobbler recipe that didn't involve the use of a cake mix.  From there it was a cinch to change.  After triple lining the dutch oven with foil we were all set.  I hope you love it as much as we do!
Dutch Oven Blueberry Cobbler
1/2 stick butter
cake batter:
1 1/2 cups sugar
2 cups gluten free four
1 teaspoon xanthum gum
1 tablespoon baking powder
1 tsp salt
1 1/2 cups milk
Blueberry Topping:
4 cups fresh or frozen blueberries
1/2 cup sugar
1 teaspoon lemon juice
1 teaspoons cinnamon plus more to sprinkle on top
1/4 cup water
Mix blueberry topping together and let it set for a few minutes while you get everything else together.  Melt butter in a 10" or 12" dutch oven using 10-12 briquettes as the bottom heat.
Mix together dry ingredients for the cake batter and the milk and mix until smooth.  Pour batter over melted butter. Do not stir.  Spoon blueberry topping over the top of the batter. Do not stir. Sprinkle an additional 1/2 -1 teaspoon cinnamon over the top of the cobbler.
Cover and bake using 10-12 briquettes on the bottom and 18-20 on the top for about an hour.  Our is a 10" dutch oven and it took about an hour and 15 minutes.  Rotate oven and lid 1/4 turn every 15 minutes.  Cobbler is done when crust is golden brown and a knife inserted into cake comes out clean.  Serve with whipped cream or ice cream. Pouring in the cake batter 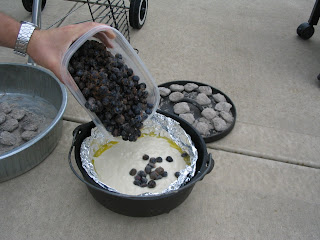 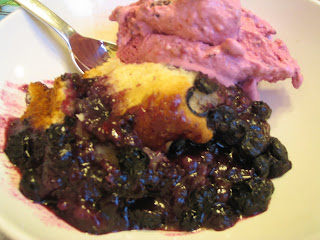 Served up with some homemade raspberry ice cream. YUM!
As an additional note, I've shared this with some friends who wanted to make this in the oven.  I had them use a 9x13 cake pan and bake at 350 degrees for 20-30 minutes.  It turned out great!

That looks so insanely delicious!!!

I was lucky enough to be there to taste this fabulous dessert! Wow...my mouth is watering looking at it. I want to try it out.
Thanks Shane and Meri for a wonderful time when we stayed with you!
Love ya,
Mom

Kyle would love that! He is obsessed with blueberries. I think he and Deakon ate about 17 pounds while we were in Ontario. Can't beat home grown- his old home anyway.

I've created a link to this post in the "Recipes" section of our newest "Cast Iron Around the Web" entry at http://www.cookingincastiron.com

Made this recipe for our Boy Scout troop. One of our adults has celiac and can't eat the regular cobbler we make. It turned out great! The boys all said it was one of our best cobblers ever. Thanks for the great recipe and directions. I'm going to try it in the oven to bring to work next.

Made this recipe for our Boy Scout troop. One of our adults has celiac and can't eat the regular cobbler we make. It turned out great! The boys all said it was one of our best cobblers ever. Thanks for the great recipe and directions. I'm going to try it in the oven to bring to work next.