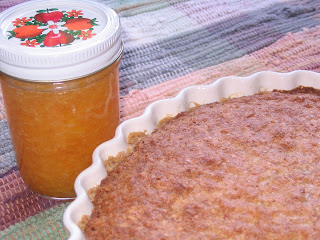 The June Daring Bakers' challenge was hosted by Jasmine of Confessions of a Cardamom Addict and Annemarie of Ambrosia and Nectar. They chose a Traditional (UK) Bakewell Tart... er... pudding that was inspired by a rich baking history dating back to the 1800's in England.
My Bakewell Tart...er...pudding isn't even out of the oven yet and I can tell it's going to be fabulous! The first layer of a Bakewell Tart is the tart shell. I used the Tart Shell Crust recipe from Annalise Roberts Gluten-Free Baking Classics Cookbook. It's a first trying this particular recipe, but I've loved all of her recipes that I've tried, so I'm not worried about how it will turn out.
After making the tart shell and putting it (unbaked) in the freezer to chill, I started on the next layer - the jam. This can be any flavor that you want. I chose peach because I had some peaches in the freezer that I've been meaning to make into jam and now was as good a time as any to make it. I followed the recipe on the box of sure-jell pectin for peach freezer jam.
With the tart shell chilling and the jam setting up, it was time to move on to the delicious third and final layer - the frangipane. The recipe we were given to use was measured by weight and although a kitchen scale is on my list of things to own day own, it has not made it to the top of my wish list yet. Instead I did some research and came up with the following proportions:
Frangipane (for a 9 inch tart)
1/2 cup butter softened to room temperature
1 cup sugar
3 eggs
1/2 teaspoon almond extract
1 Tablespoon gluten free flour mix
1 cup almonds ground finely in the food processor
Preheat oven to 400 degrees. Cream butter sugar. Add eggs one at a time mixing until well blended. Add the almond extract, gluten free flour mix and ground almonds and combine.
Now it's time to assemble and bake the tart:
Spread the chilled tart shell with 1/2 - 2/3 cup jam. Spread the frangipane on top of the jam layer and place into the oven and bake at 400 degrees for 30-40 minutes. The tart should be browned and firm to the touch but slightly soft in the middle. Let the Bakewell Tart cool for 30 minutes before serving.

peach sounds delicious! love to hear how it turns out

your tart looks lovely. i bet the peach was delicious!

Yeah for you! :) Fantastic job!
Are you going to share the tart shell recipe??? :)

Thanks for participating.
j

my sister told me about your blog and i am really excited to follow it. i just found out that i am allergic to gluten and that by avoiding it my healthy will start improving immediately. I was really sad but after looking at your blog i think it will be fun making new and yummy things to eat. Does gluten free mean wheat free?
mrs.jenny.clark@gmail.com

Jenny, good luck with your gluten free journey. It seems pretty overwhelming when you start, but you'll soon find that you can make so many wonderful gluten free things that you don't need the other stuff! As per your question about gluten free being wheat free: If a product is gluten free it IS also wheat free. However, if something is wheat-free, it may contain barley and rye so it might NOT be gluten-free. Just read the ingredient list on everything and when in doubt email the manufacturer. It takes some getting used to, but pretty soon it will become second nature. Good Luck!